flesh to bone (2013) is a collection of nine short stories written by Chicana author ire'ne lara silva. These stories delve into some of the most popular Mexican folk-tales and depict a landscape where everything is possible, the boundaries between life and death are blurred, there are shifting realities, violence, magical transformations and, ultimately, healing. Some folk-tales are widespread like La Llorona, also known as La Malinche, others are myths and stories transmitted by the author's own family. Silva has expressed her fascination with the idea of creating new myths, in ways that build on figures that resonate with other mythic figures: “I believe we have a fundamental need for myth. For stories that are larger than ourselves or our realities, for stories that speak to our culture(s), for stories that teach us something about life” (Silva 2014). In her writing process, Silva rewrites these myths from a feminist and Chicana perspective subverting the underlying patriarchal roles and the boundaries between the living and the dead. In ‘cortando las nubes or death came on horses’ the myth of La Llorona gets reconstructed, she is remembered, respected and understood. Silva manages to give this suffering woman a voice she lacks in the popular version of the horror myth. ‘cortando las nubes or death came on horses’ tells the story of a woman from the Yaqui community and her three children, Marigold, Tomás and Cempasuchil, who are brutally murdered by white colonizers and roam the earth helping indigenous communities and collecting those who die at the hands of the whites.
As Norma Alarcón states, “Feminism is a way of saying that nothing in patriarchy truly reflects women unless we accept distortions – mythic and historical” (189). Chicanas, and especially queer Chicanas, occupy a unique position from which they recognize these distortions. Following the ideas presented by Kate Millet, a pioneering author in contemporary feminism, a study that adopts a feminist approach to literature will analyse the patriarchal relationships between characters in the narrative. The present work is intended to analyse ire'ne lara silva’s "cortando las nubes or death came on horses" a short story from flesh to bone (2013) from a feminist perspective. It will be argued that, in her re-imagination of a traditional myth, the author honours and celebrates her identity as Chicana. 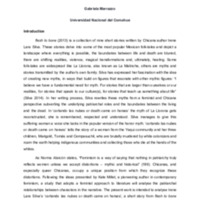